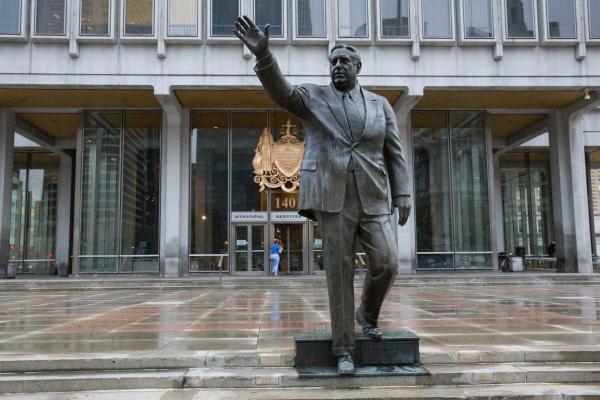 I always believed that art, in this case a statue, was meant not only to honor the person whose image is being depicted but also to evoke a response, good, bad or otherwise. Clearly this is the case with the statues across the nation that some are seeking to remove or even destroy. Obviously, those who want these statues removed find them offensive or insulting.  Those persons are entitled to their views and such views should be heard and respected. However others, possibly a less vocal or even a silent majority of others may disagree so clearly everyone cannot be pleased at the same time. Are the rights of those Americans who don’t agree with such removals to be rejected? If so, on what legal or legitimate basis? It doesn’t take a lot of in depth analysis to see that the statue of almost any famous personage can in some way be considered offensive to some group of people at some time and place in history.  Let’s be honest. If a group of Christians were to erect a large statue of Jesus Christ directly across the street from a synagogue would not the congregants of the synagogue rightfully find such a statue offensive? On the other hand the Christians might insist on their right to build the statue. What would the reaction be if a menorah were erected in a predominantly Muslim neighborhood? Would that be acceptable? Religious statues of any sort are probably repugnant to American Atheists. On that basis all religious statues should be removed.  Christopher Columbus is viewed by some as a symbol of enslavement. Should his statue be removed and if not why not? Does removal depend on whether or not the offended parties complain or how vocally? If not then let America become a statue-less country. No more statues, period! Then there can be no offense to anyone.

Possibly there is another way to view this situation. Maybe these statues can serve another purpose. A statue of a Confederate soldier can serve to some as a symbol of a time when many Americans believed that it was entirely proper to own and mistreat slaves for personal and economic reasons.  Such symbols will undoubtedly still be revered by mean spirited, ignorant people. But to others such symbols can be a learning tool whereby present day Americans can tell their children about the great divide in our country that was caused by slavery. A divide that led to a horrible war where many Americans on both sides fought and died for what they believed in. A divide that ultimately brought the nation together as a unified America. An America where the vast majority of people don’t think or feel the way that those confederate soldiers thought and felt. Those soldiers weren’t necessarily bad people. They were made of the same flesh and blood as all of us. They had parents and brothers and sisters and family who loved them dearly and they died for what they believed in. History is written by the victors. Had the Confederacy won the war, how would present day Northerners feel about the destruction of the statues of  Yankee soldiers? Destruction of such symbols is a denial of our History, good or bad.

My ancestors in this country were referred to as “wops” “dagos” and “grease balls”. They were held in submission by then powerful Irish cops and politicians. They were forced to accept the most menial of jobs at little or no wages just to survive. When my dad applied to Medical School, one school and now a “prestigious” school at that returned his application stamped “Italians need not apply”. But Italian Americans persevered and succeeded as have Black Americans, Irish Americans, Jewish Americans, Hispanic Americans and Asian Americans. I’m not the least bit offended by statues or tributes to Irish Americans of that time. That was then and this is now. I can’t blame Irish Americans for what their ancestors did. That would be sheer hypocrisy.

So let’s consider the statue of Frank Rizzo.  Prior to the Charlottesville abomination, no one complained about his statue. After Charlottesville, statue bashing suddenly became a nationwide craze.  Well, what is more important, what a public figure believes and feels in his or her heart and soul or how he or she carries out their public responsibilities. We can never know what a person truly believes but we can and should judge their public actions. Do we deny that every human being is possessed of some good and some bad? That people can change their views for the better. That they can mature and become truly better people. Mr. Rizzo did some bad things but he also did a lot of good things for his city. He was human. Mayors come and go but Frank Rizzo was truly memorable and so a statue of him was created and erected. Some see that statue as a symbol of racism and oppression but others look upon the statue with pride and admiration.  Which opinion is correct? Instead of removing the Rizzo statue why not erect a statue of equal size and presence of Cecil B. Moore, another great Philadelphian, and place it next to Rizzo. I’ll bet that if we could ask both men they would both say that in spite of their differences they both, with time, respected each other.  Regardless, are we to learn from these symbols and take whatever lessons they provide or do we destroy them and pretend that our past didn’t exist? Honest disagreement usually leads to discussion and compromise. Suppression, especially at the insistence of a few, leads to hatred and resentment. Furthermore, the time, expense and effort it takes to remove a statue would be better spent on feeding the poor children of our city, helping our sick and our veterans, improving our prisons and the list goes on. Do we want to further divide our City and our Country or do we want to unify them? Let’s start acting like Americans who believe that free expression whether we like it or not lies at the core of our republic. We must remember that for every action there is an equal and opposite reaction. Let that reaction result in a great and unified Philadelphia and United States of America.