On September 19, 2015 my client, a 23 year old hair stylist was boarding a flight at the Philadelphia International Airport, heading to a “Hair Styling Convention” in Las Vegas. Unfortunately for her, when they passed her carry on bag through the X-ray machine, it detected her brass knuckles in the bag. Indeed a subsequent search of the bag resulted in the seizure of the brass knuckles. My client was arrested and charged with a violation of 18 Pa. CSA 908, Possession of an Offensive Weapon. In preparation for the trial, I along with my research team carefully reviewed the aforementioned statute which lists all of the objects that a person in Pennsylvania may not lawfully possess. All Criminal Statutes in the United States must be strictly interpreted in favor of the Defendant. Well surprisingly, the statute doesn’t mention “Brass” knuckles rather it lists “Metal” knuckles. Another rule of statutory interpretation is that the statute must place the Defendant on notice of the crime charged. This statute however does not define the term “knuckles” So we diligently searched for a legal definition of “metal knuckles” We consulted, legal dictionaries, Webster’s Dictionary, all of the Pennsylvania and United States Treatises, and we even resorted to ancient Roman and Greek law and we even went so far as to research the ancient Code of Hammurabi! Nothing! So finally we went to the authority of last resort, Google ! You will be shocked at what we discovered. Let me introduce you to Metal Knuckles: 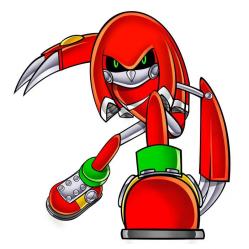 According to the Mobius Encyclopedia,“Metal Knuckles is a Metal Series Badnik modeled after Knuckles the Echidna and built by Dr. Eggman. After it's production, Metal Knuckles first saw action against the Echidna homeland of Albion where it was left behind to support Lien-Da's Dark Egg Legion chapter. While it battled Team Fighters, Metal Knuckles was disabled by a defense system, which left the robot prone to becoming a host body for the Krudzu Hybrid Hydra. Due to the combined efforts of Team Fighters and Shard the Metal Sonic, Metal Knuckles body was completely destroyed and the Krudzu subdued.” (Mobius Encyclopedia)

The trial in the case commenced on November 15, 2015. The District Attorney, called the TSA agent who testified as described above. In a serious manner, I made the statutory construction arguments and I did argue that there is no definition anywhere to be found of “Metal Knuckles” And, yes, I humorously introduced the Google article of the fictional Metal Knuckles as Defense Exhibit 1. Verdict, Not Guilty!

Now the real problem in the Commonwealth’s case was that the TSA agent never brought the brass knuckles to court. A defendant is entitled to see, confront and examine the evidence, so there was a total absence of proof as to what the object really was and what it was made of. I know that to a lay person it may sound silly, but a criminal case must be proven “Beyond a Reasonable Doubt” and this case was not so proven! But I have another problem with this statute. A person can own and with a permit can carry a gun but according to this statute, is absolutely prohibited from possessing brass knuckles or a black jack. Does this make sense? I walk all over the city and the threat of pick pockets and robbers is ever present. I would never want to shoot a person unless my life was in danger but I sure as hell would love to give a robber or pick pocket a shot with my black jack or brass knuckles! So maybe we should petition the legislature to pass a law which would provide for permits to carry a black jack or brass knuckles for self-defense. Sometimes the law is just plain asinine!